When one looks at the map of the Choroszcz district it is easy to notice dense network of Narew inlets and old river beds extended from Izbiszcze to Ruszczany. That is a part of marshy Narew valley which is formed by many beds of the river. Narew itself has been shaped for thousands of years and supplied by spring floodings from melting snow. Such a water reservoir system is influenced by the fact that the river crosses there several lines of moraine hills created at Middle Poland Ice Age. The elevations cross the valley which results in diversion of the river from East-West near Izbiszcze to West-East near Pańki and Rogowo and to South-North near Żółtki. Some thresholds can be found at the bottom of the valley and the decelerate the water flow. There are also several reservoirs. Their depth is much lower than in the rest of the valley. The reservoirs are therefore the places where river and ground water accumulates, peat gathers and the ground become marshy. 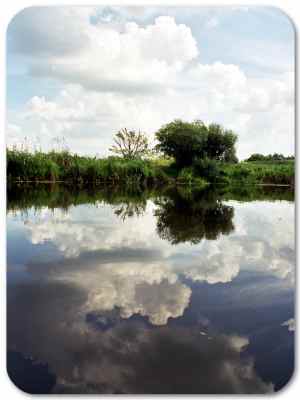 It was in 1985 when Narew Landscapes Park was organised at the part of the valley between Suraż and Żółtki as well as at the hills surrounding the valley. On 1st July 1996 the government decided to organise Narew National Park at the part of the marshy Narew valley from the dyke between Rzędziany and Pańki to Suraż to ensure the most effective protection. The Park's treasure is variety of flora formed by 46 complexes of plants. Water and swamp plants dominate. Such diversity favours birds concentration. Over 200 species were noticed there, 154 of them are broody ones. Every year many species are spotted, many of them rare or very rare, such as: bąk, 3 species of błotniak, kropiatka, zielonka, dubelt, wodniczka, derkacz, krwawodziób or rycyk. Narew National Park is a mainstay for water and swamp birds. The area with especially interesting wildlife in the district of Choroszcz is the part of the vale between Kruszewo, Kurowo and Radule. It is possible to near and see the valley thanks to a road that exists here - a dyke to the Broken Bridge in Kruszewo. The bridgehead of the Broken Bridge is a perfect view point and a suitable place for short rest.

The water system which had been formed for thousands of years was partly destroyed at the time of Narew regulation in the sixties and seventies. The bed of the river was straightened, widened and deepened and numerous old river beds were separated from the main bed. That led to deep changes in the environment because of significant lowering of the water level in the river itself as well as in adjacent grounds. Since then the Narew valley is lessened by the part between Rzędziany and Ślina estuary, which had been drained. Former swamps are meadows now and they are extensively used. Unluckily large meadow areas were drained too effectively and now they are steadily degraded or even damaged by fires. The mentioned area which extends from Sosnowiec grove at Pańki village along the river requires restoring the original water system.

The park administration together with bird protecting organisations have been trying for several years to buy the grounds and to do particular works such as deepening the reservoirs at the river and opening the separated old river beds which drain steadily. Such projects were not accepted by farmers in the past but nowadays are supported by them as the farmers see constant degradation of the grounds near Ruszczany, Rogowo or Rzędziany which had been drained too extensively. Many of them decide to sell their grounds in the valley to help to protect the environment.

Narew National Park includes area of 1619 hectares situated in the Choroszcz district that belongs to villages Pańki, Kruszewo and Izbiszcze. National Park creation gives hope that unique water and swamp ecosystems with their diversity of fauna and flora will be preserved.

In Choroszcz district 11 monuments of nature can be found. They are distinguished because of their age, large size, culture value as well as historical or decorative. The full list is as follows:

Buildings are monuments of cultural value. The catalogue "Monuments of architecture and building in Poland. Białystok province" edited in 1992 mentions 129 monuments of Choroszcz district. Those, which are more valuable and important and connected with the historic plan of Choroszcz were described separately in the guide mentioned above. Some of the others are worth noticing as well and they are as follows:

There are items worth interest which were not mentioned at the list. In many villages traditional wooden farms still can be found as well as thatched buildings, windmills, chapels and crosses at the roads and high hay stacks which are kept at the meadows till winter and which contribute to picturesque landscapes.

A unique attraction of staying at Narew is a ride on a traditional push-boat. The boats were used to transport hay which was collected by cutting grass on the grounds between Narew forks. They were also used for net fishing which is now forbidden. Nowadays the boats are used for fishing with rods. Those who love swamps and bird-watching use them to wander in the maze of "Polish Amazon" and can enjoy the nature with peace and quiet. It is one of the most attractive forms of special tourism, which is supported by the Park administration and Warsaw private swamp tourism agency "Bird Service". We can predict that soon swamp tourist agencies will appear in other villages near Narew. That will give their inhabitants an opportunity to gain additional income which will probably influence their involvement in protection of magnificent environment of Narew National Park.