The Church and Monastery of Dominicans

Dominican monks came to Choroszcz thanks to the then owner of the lands - Mikołaj Stefan Pac, the province administrator of Troki. The church which was built by the founder's parents burnt in 1683 when the fire destroyed all the town. 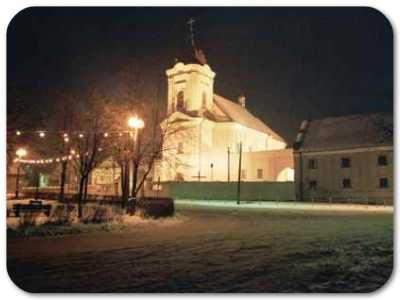 The church as well as the monastery were rebuilt in another place to protect them from fires and destroyed during the north war fights in 1707. New buildings, which were again made of wood, lasted to 1756. That was when Jan Klemens Branicki moved the Dominican monks to the place where their church is situated nowadays. The brick church and monastery formed a square with the enclosed courtyard inside. The inside of the church as well as the refectory were splendidly decorated in rococo style by Branicki personal artists. The monks brought "The Crucifixion" painting famous for its miracles and numerous relics including the ones of St. Candid which are held till nowadays. There is a legend connected with them which tells that the Judgement Day will come when the Saint raised hand touches the reliquary lid.

Dominican monks fulfilled eagerly their pastoral duties and worked as preachers and teachers as well. The school organised and led by them was famous in Podlasie and their library had several thousand volumes. Unfortunately after the November upraising, in which the monks took part, the tsar authorities made them leave Choroszcz.

Another important date in the history of the church and monastery was year 1915 when it was burnt again. When it was rebuilt the tower was covered with a much lower dome. In 1918 two aisles were added, which changed the church profile and two nearest parts of the monastery: part of the facade and the refectory were demolished. That plan of the church lasts until now.