"In a distance from Białystok and the palace, which could be a creditable residence for many sovereigns, a country house in Choroszcz is situated. Apart from France, I have not seen anything more pleasurable. The apartments, gardens, pools, everything shows perfect elegance" - these were the words a French diplomat Pierre Henin used to describe Jan Klemens Branicki (1689 - 1771) summer residence. Henin was one of many guests who found the estate marvellous. 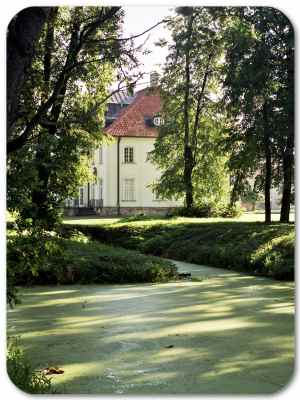 The residence in Choroszcz was developed in some stages. The original palace was probably founded in 1729-30 on an artificial island surrounded by canals. The building which had been raised on marshy ground, crumbled fast and in 1757 Branicki decided it would be demolished. Another palace, almost identical, was built in the same place. The palace was small, it consisted of only 22 rooms and numerous guests could not feel comfortable. Therefore two small pavilions for guests were founded and later in years 1760-1763 two side-buildings were raised: one of them holded bedrooms for guests, the other- kitchens and a dining room. The complex was completed by two small buildings at the entrance: the guard's house and the watchman house.

The garden and park changed constantly and their appearance was greatly influenced by a French engineer Ricard de Tirregaille. The main water reservoirs network, the palace situation among them, paths and view points system were all similar to those of the earlier Andre de Notre, who was Louis XIV's architect, spatial projects. The main view axis was 400 m canal with a hill called "Parnas" set at one end of it. A part of the garden which was situated near the palace was arranged in French style, while the further part was more chaotic complex of forests and animal parks. The guests were welcomed so generously that even the French ambassador though used to luxury was impressed. Many diplomats, scientists and artists of the époque came to the summer residence. King August III used to stay there with the court as well as king Stanisław August Poniatowski, Jan Klemens Branicki*s brother-in-law. The life of Choroszcz residence with its joyful parties were described in novels by two brothers: by Józef Ignacy Kraszewski in "Hetman's Sins" and by Kajetan Kraszewski in "Bartochowski". It also was a tradition that hetman's wife Izabela nee Poniatowska gave her birthday party in Choroszcz.

The residence was not lucky enough to keep its magnificence for long. When the Branickis died childless, its fortune changed several times. Critical moment was year 1840 when the dilapidated property was bought by Christian Moes, who wanted to start a textile factory. Some of the household buildings were demolished then, new ones were raised and the palace was rebuilt throughout and connected with the side-buildings. The nearby factory, that produced wool fabrics, was one of the biggest ones of the region. The park changed as well: some canals were liquidated, new species of trees were planted, new paths were set and original plan was destroyed.

In 1915 the palace was destroyed by war as well as the pavilions, some of the household buildings and the factory buildings. Only in 1960s the palace rebuilding according to the 18th century plans of the front and the upper floors started. The park was also renovated and the original system of canals and paths was restored. When the works were completed and the rooms reconstructed to the smallest details, Palace Indoor Museum was organised there.

Original furnishing of the Branicki time was dispersed short after hetman wife Izabela's death in 1808. Only two mantelpieces with Branicki's coat of arms Griffon and Poniatowski's Ciołek were preserved. Furniture, paintings and small works of art., which date back mostly to the 18th century are exposed at the ground floor, where the rooms situation is only slightly different from the original state.

The furniture displayed shows the evolution from massive baroque shapes to delicate rococo ones and Louis XIV classic elegance. The significant paintings are portraits of the residence owners and people connected with them: kings August III and Stanislaw August Poniatowski as well as general Stanislaw Mokronowski.

The first floor, where the rooms plan is different from the original, holds a collection of furniture dating back to the 18/19th centuries and up to 1850s. Some of them are especially interesting: Chippendale furniture with an exceptional card table, called "karciak". The exposition contains also numerous bronze and marble statues, china of famous European manufactures, historical clocks, candelabra and carpets.